Mixture of flour, pepper and salt

Bacon grease in the pan

I seared the meat on all sides

Carrots, celery and onions in the crock pot

This is good stuff!

Carrot peels and celery ends are off to feed the Red Wigglers!

Yesterday, I made pot roast in The Original Slow Cooker…Crock Pot. Carlos bought this for us 2 years ago.  Unfortunately, I don’t use it that often maybe 4 or 5 times a year.  The recipe booklet it came with is limited so I need to explore some others.  That may be why I don’t use it that often because other than the limited recipes, the pot is AWESOME.  Using a crock pot is sooo easy.  Just throw everything in, set it to low, let it cook for 8-10 hours, and you’re done!  If that’s too much time, you can blast it on high for 4-6 hours!

This recipe is taken directly from the booklet.  I modified it a bit because my kids don’t like the potatoes cooked this way and would prefer them mashed!  I need to clarify that: Max loves them and Little a not so much!

3 potatoes, quartered (I left this out and saved them for mashed potatoes)

This part is so cool because it’s SO FAST and SOOOO EASY…I love fast and easy! lol

1.  Coat roast with the flour, salt and pepper.  Sear roast in a pan on the stove.  They say this is optional, but I do this to seal in the flavors and make the meat moist! This is funny! I cooked bacon this morning and left some of the grease in the pan, hoping it will make the meat more flavorful :^)

2.  Place all veggies in the crock, except the mushrooms.  Add the roast and spread the mushrooms on top. Pour in broth.

There aren’t a lot of scraps for the Red Wigglers, but they’ll be happy with the carrot peels!

This is really the best banana bread recipe!   It’s just super tasty and made with the real stuff. You’re not gonna find fake sugar or fake oil here.  Just real honest to goodness real ingredients!  It’s super easy to make and doesn’t take a real long time to mix it up.  I whooped it up in 10 minutes and baked it for about 50 minutes, depending on your oven. (Ours at the moment is really screwed up.  Things aren’t made the way they used to be so I make sure to poke it before pulling it out of the oven.) 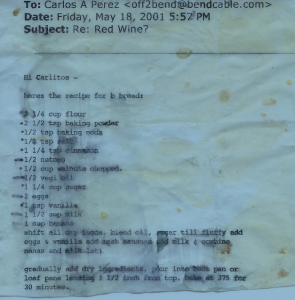 As you can see by the picture, I bake this often and I am a really messy baker! There are oil drops, batter smears and water stains!  I could have retyped this, but I love the history behind the paper and the recipe!

My sis in law, Yvette, made this for us when she came to visit Bend for the very first time.  She had these really cute loaves of bread for us along with a bottle of wine. What an awesome house warming gift!  We really love bread, all sorts, and really, really, really, really, really, really love red wine!  We drank the wine that night and ate the bread the next morning.  We loved it so much that upon her return to La La land, she found an email from Carlos, requesting the recipe for the bb bread. Yvette is really, really nice and emailed it that evening! and there ya go!

By the way, I think it’s really, really cute that his sisters call him “carlitos”.   I can’t get rid of the recipe for that reason, too!

Beef Stew for the crew

Here’s my first true cooking post.  I have a few foodie posts on the blog, but this one is a bit different.  I am adding the recipe and some step by step images.  I love beef stew and enjoy making and eating this fabulous, hearty dish on cold days.  Today is a perfect day for stew.  We are expected to get about 3 inches of snow on top of the snow that fell last week.  I think I made too much and plan on inviting my favorite in-laws over.  I do hope they come and save me from over eating.  Plus, I love their company!
The stuff you need from the store and your pantry!

An UPDATE: Today is Wed.  I started this post on Tuesday and thought I would finish it Tuesday Night!  I had really good intentions.  I planned on taking pictures of the finished stew atop a heaping bed of egg noodles.  But Ya know what?  I FORGOT!  I was soooo overwhelmed by the smell and was tooooo dang excited to eat it!  ooooooh, the things that excite me these days, Red Wigglers, the pH value, recycling cans, peanut butter, food and gin and tonics!

My favorite in-laws came for dinner, including Yvettskies visiting from La La Land.  It was a bunch of fun, and Max serenaded us with some Christmas music on the piano.  By the way, the stew was AWESOME!  and as you can see, I still need write a full foodie post!  Till next time….. 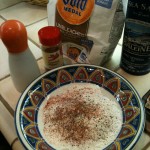 About a cup of flour, a teaspoon each of cayenne pepper, salt and pepper 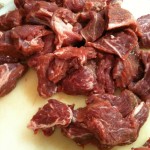 Cut up the chuck into about 1 inch cubes. 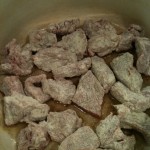 Coat the meat with the flour mixture. Brown the meat on all sides in the oil on medium heat. 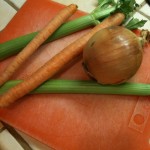 Geting ready to chop away 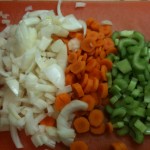 While you are waiting for the meat to brown, chop the veggies. I like my veggies chunky. 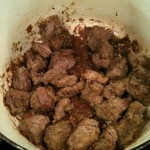 Meat nice and brown and a bit crispy 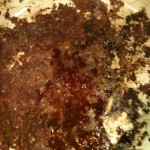 Remove the meat and this is what’s left in the pot! Don’t get rid of this goodness 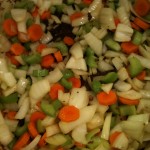 Add another teaspoon of oil. Then add the veggies! 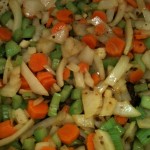 Ready for the meat after being browned for 5-10 min 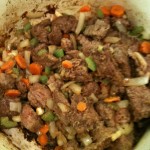 The veggies are united with the meat! Cook for another 5 minutes. It smells so good at this point! 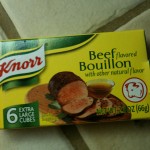 Add 2 cubes to the veggie/meat mixture. Then add 2.5 quarts of water to the mixture.

Wanna play a little game of “I Spy”? 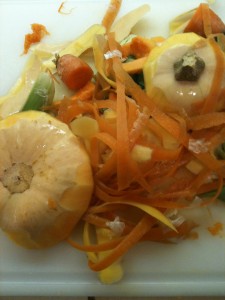 Food scraps for the wigglers!

Today I made a huge pot of soup.  I am not going to tell you what type…not just yet!  First, I’d like you to play a game with me. Please, please, please play along with me! Are you ready?  Too bad I won’t be able to hear your guesses.  Oh well!

O.K. so here goes.  I am sure in your life you’ve played “I Spy”, right?  Well, if not, I’ll give you quick “how to”.  You can play this game with an unlimited number of players.  You need at least one person to play with besides yourself.  Basically, it’s a guessing game.  You look at an object, maybe an apple that’s on the counter.  You would say, “I spy something red” and the person tries to guess what you are looking at.  Not too difficult, right? Let’s play!  Be prepared to be challenged!

I spy something orange and stringy…..

I spy something green….

I spy something yellowish, orangish…..

I spy something tiny that’s white…

All done……Here are the things I was looking at.

Something that’s orange and stringy…… the carrot peelings

Something that’s tiny and white….garlic peels

Do you know what kind of soup I made?……

Butternut Squash Soup!  These scraps are now in the worm bin being devoured by the Red Wigglers! 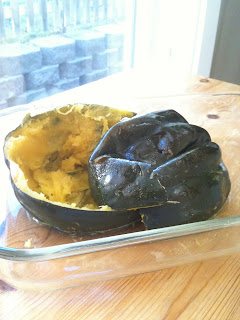 Holy Moly! I chowed this delicious acorn squash in, uh…., under a minute. More like 20 seconds, seriously. I had this amazingly tasty veggie all to myself. The kids were at school, and my hubby is on a mini vacay! Glad they weren’t here to witness my slurping and totally awful manners!

This super veggie is loaded with bazillion amounts of Vitamin A which is super awesome for your skin. Today, I cooked it in the oven at 400 with about a cup of water in the dish. After 30 min, it was soft and ready to be inhaled. Before the feast, I doused it with 2 teaspoons of brown sugar. In the past, I have added butter and some maple syrup. Today, I skipped out on that stuff. It would have taken too much time to get all that out, and I was starving.
So now these scraps will be on their way to the wiggler bins. Just giving them a tidbit, a little teaser because in the next few weeks, they will be enjoying huge amounts of pumpkins and gords!
wonderworman.blogspot.com 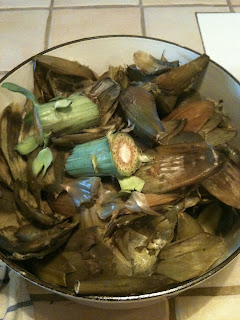 Last night, Carlos and the kids made artichokes stuffed with Italian bread, garlic, parm cheese, parsley, oregano and some vegetable oil. We devoured the delicious goodness! Can’t you tell by the picture!

As I was pigging out, I couldn’t wait to share my scraps with the Red Wigglers. My buddy Kristi makes these often because her sweet daughter LOVES them. I find them often in the Neighborhood Community Bin for the Red Wigglers.

The Red Wigglers love them, and I wrote about them in April of 2009 after my first time feeding them. The post was short and sweet, but this is what it said…
Hey, guess what??? Worms love artichokes! Rotten ones and eaten artichoke skins (I think that’s what they are).
They were all over them this afternoon! Yipee! cause I love them toooooo!

I fed a few of the wigglers last night and will make my way out to the larger bins this afternoon. I’ll sprinkle a layer on top and give them a yummy treat. So next time you have some artichokes, feed the scraps to the wigglers. I didn’t rinse mine to remove any of the stuffing, not there was a lot left after I got through with them.

What I’m trying to say is…Don’t worry if there are remnants of stuffing. Go ahead and feed them to the Red Wigglers. A little bit won’t hurt them. Everything in moderation!