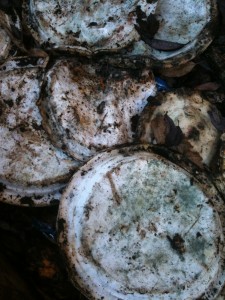 Can you see the bag? Look for the blue spots

Today marks the first week of my SunChips compostable bag experiment.  These updates will be brief without any fluff and stuff.  My format will be more scientific and less opinionated!

II.  Purpose:  To test the compostability of the SunChips bag.  Will it compost in a worm bin in 13 weeks, using the correct amount of browns and greens?

III.  Prediction:  I believe the bag will break down into usable compost in 21 weeks.  (I loved when I was 21!  Oh, that summer at college was amazing!).  I just picked that number out of my as%, just knowing it will be longer than 13 because SunChips recommends the hot composting method over the cold vermicomposting method. 21 just sounds like a good # and the movie wasn’t too bad either!  The book was better!

IV.  Materials:  Wonder Worman Bin, about 2lbs of Red Wigglers, a bunch of food scraps, a bunch of leaves, some peat moss, some shredded newspaper and about 30 compostable plates.  Those plates are still there since July, but they are slowly breaking down.  I will be tearing them up before December.  I gave those suckers 4 months (16 weeks) to do it themselves.  I think they need some of my help. Oh, I almost forgot and ONE SUNCHIPS bag!

V.  Procedure: Cover the SunChips bag with the bedding mixture and let is decompose with the help of the various decomposers that inhabit a Wonder Wormin bin.  Did you know there are more than Red Wigglers in a bin?  That’s saved for another post. 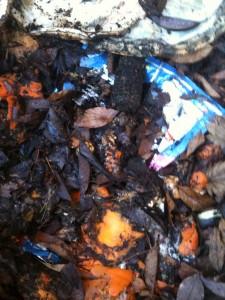 Bag in the bin. The plates are removed for better viewing.

VI.  Observations and Data: When the SunChips bag was first put into the bin on 11/10, the bin’s temperature was 60F.  On 11/18 the temperature was 58F.  When uncovering the bedding and looking at the bag, without taking it out of it’s place, the bag looked as it did at the initial start of the experiment. 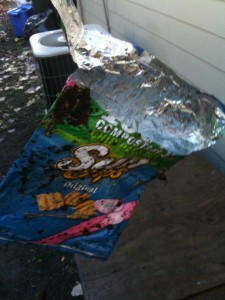 Look there's a rip in the bag!

The bag ripped when I took it out of the bin!  This is a sign.  The bag is breaking down on some molecular level!  I think……I have no idea, but for it to rip when I gently lifted it to take a picture, something must be breaking down within the bag!

VII.  Discussion:  Anyone want to discuss with me????  more later…