What if I have mites? 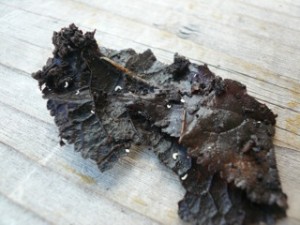 See the white specks on the decomposing leaf?  They are mites. Mites are part of the decomposition cycle and are also members of a worm bin, too. They will not harm the Red Wigglers as long as there isn’t an explosion in their population. Mites feed on decaying matter and are usually found on the surface but may go deeper depending on where the food is located.

Treatment: If there are too many mites in your bin, then you’ll want to make some changes.  I suggest doing one or maybe all of these ideas.

1)  Remove the food source where the explosion is occurring.  Usually it will be covered in mites to the point where you can barely see the food.  I would toss it into your yard or bury it.

2) Remove the top few inches of bedding.  Sometimes the mites are covering the top of the bedding.

3)  Leave the bin open and expose it to light.  This will help dry out the surface.  Mites do not like a dry area.  The sun light will also help to control the mite’s population.

4)  Add some dry newspaper to absorb the excess moisture.

5)  Stop feeding for a week.  Freeze any food scraps that you are producing in the meantime.