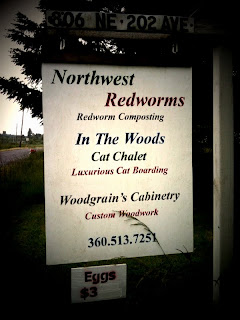 I went to Camas, Washington over Memorial Day weekend with my family to check out Doug’s business Northwest Redworms. Doug is a really neat guy loaded with red wiggler information. His place is about 10 acres, and he has lots of chickens, too many to count, a cow named Mud, and some cats that wander around the place.

My visit’s goal was to ask questions and to learn from his success. When we arrived, he was loading up a guy’s pickup truck with worm castings. The castings were rich in color and actually looked like a batch that I recently harvested. Seeing the similarity, really got me excited. By the way, this guy drove from California just to get Doug’s castings!!!
We then began the tour of his business. He had bins all over the place. Some were made from concrete molds and were about 5 feet long with holes on the bottom. Others were made from wood rescued from the landfill. He had bins under trees and bins under frost sheets. The coolest compost piles were the free standing ones filled with animal droppings. Figures I’d like that! He was testing Alpaca Poop, too. After getting the gloves, we got busy digging into the pile. It was loaded with red wigglers, and there was steam coming off the top. I was amazed! The worms were there. After all of the research with hot composting, I thought the worms would not survive. The pile also had veggie waste and yard debris mixed in with all of the poop! I have a client who wants to start composting her Alpaca poop and will definitely be able to steer her in the right direction. I am excited to share my new found knowledge with the worm loving community of Bend!

I need to stop here cause

1) I feel like I am a terrible writer
2) and I have a feeling no one is even reading this blog!

kinda negative on my part! but have to say what’s in my brain!!!